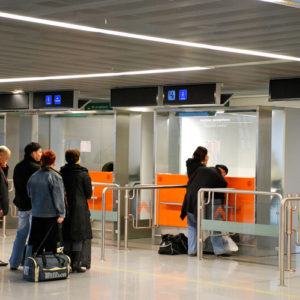 William Ericson Ladd was born Sept. 14, 1974, in Atlanta. He died a month before his fifth birthday in a car accident. On what would have been Ladd’s 47th birthday, a flight attendant named William Ericson Ladd entered a secure crew member entrance at Houston’s George Bush Intercontinental Airport, where customs officials conducted an extensive interrogation.

Investigators say the senior United Airlines flight attendant had posed as the long-dead Georgia boy for two decades. Ultimately, he admitted to federal agents he was Ricardo César Guedes, a 49-year-old who owned a Lake Houston home, got married, bought a BMW, took out a loan and worked as a flight attendant, including 40 trips for United in 2020 — all in Ladd’s name.

In the past five years, the Diplomatic Security Service has opened an average of 2,000 passport fraud cases yearly, investigating such cases. Special agents stationed in 86 countries track down evidence for the State Department along with partner law enforcement units in 15 countries.

A review of local prosecutions reveals Guedes is among several defendants accused of playing the long game, spending years constructing a fake identity based on a pile of real documents that belong to someone else. Guedes also used Ladd’s identity to sponsor his spouse’s application for permanent residency. He has no prior criminal record. His defense lawyer declined to comment.

The particulars of local prosecutions shed light on the complexities and cruelties of passport fraud, a crime that has become far more difficult to pull off as official IDs become increasingly high tech.

Nicholas Porter, an assistant special agent in charge with Diplomatic Security Service, said defendants in these cases take on the identities of dead and living victims. Con artists cannot just paste a photo into an existing passport like they may have done in the old days, he said. Instead, aspiring impostors tend to build their way to a fake identity over time, obtaining one authentic document after another in their victim’s name, before they apply for a passport or some other document that tips off officials to their scheme, Porter said.

“I think you’d be surprised what people find just combing the internet, looking for obituaries. There’s a tremendous amount of information on people,” Porter said. “There are multiple ways of getting basic information to build the supporting documents to apply for a U.S. passport.”

Scammers check to see if death certificates have been issued and look for young people who never established credit, he said. Sometimes they track down lost IDs. The State Department has also found that Puerto Rico is a hot market for buying real passports from U.S. citizens who don’t want them, Porter said.

Captains John Litchfield, center, Christina White, right, and Tim Mattison, left, posed in 2008 for portraits aboard the Royal Princess II at South Shore Harbor on Clear Lake. The three piloted yachts for Majestic Ventures, Inc. for special event, wedding and quinceañera cruises. White, whose real name is Cynthia Knox, was sentenced to federal prison in 2017 after admitting she had assumed the identity of a dead infant while a suspect in her husband’s California murder. Litchfield, a fellow murder-for-hire suspect, died of mad cow disease in a Friendswood nursing home in 2019.Nathan Lindstrom, Freelance / Para La Voz Floating weddings piloted under alias

Suspects in this region built fake identities by applying for increasingly difficult-to-obtain documents as they earned confidence, documents show. These defendants assumed new identities for a variety of reasons. A typical federal prosecution involves a noncitizen who is using a fake identity to live, work or travel as a U.S. citizen, officials say. In other cases, U.S. citizens with murky personal histories use new IDs to conceal their true identities or gain access to a coveted profession — or, in the case of Cynthia Lynn Knox, both.

Knox, also known as Cynthia Lyerla, was a suspect in her husband’s 1988 stabbing death in Southern California. She was also sued for wrongful death in their toddler daughter’s drowning in a fish pond, according to court records. Before that, the child had nearly died from ingesting too many Advil and again by nearly drowning in a bathtub. Knox received $300,000 in life insurance proceeds for the deaths of her spouse and child and vanished with her lover-turned-husband, John Litchfield. The couple ended up in League City piloting floating weddings and quinceañeras as charter cruise ship captains, according to court documents.

Knox admitted in federal court the first step in creating her new identity was obtaining the birth certificate of an infant who died at birth in 1965 in Santa Ana, Calif. She used that to apply for a new Social Security number in the early ’90s. Over decades posing as Christina White, Knox secured an Arizona driver’s license, a merchant mariner’s license, a transit worker ID, Coast Guard certification to operate a large vessel, a passport and Transportation Security Administration documentation. Police recovered 20 IDs and 40 credit cards in the home she shared with Litchfield. Both had served as captain on charter and dinner cruises out of Kemah and Galveston since the 1990s.

Decades later, White’s passport renewal application caught the attention of an investigator at the Bureau of Consular Affairs as a possible fraud. Diplomatic Security Service special agents searched dozens of databases, chased leads and scanned the internet, ultimately landing on a 1988 news clip about the homicide of Harold Lyerla. The agents sent White’s new passport photo to a retired detective in Lompoc, Calif., who said he was certain she was the murder victim’s missing widow. Fingerprints on White’s renewed Merchant Mariner’s license also matched fingerprints taken in the California murder case.

Knox completed a three-year prison sentence for aggravated identity theft and making false statements in a passport application, according to records. There’s no indication she was prosecuted in either her husband or daughter’s deaths.Assuming IDs of living victims

Other defendants orchestrate passport fraud to reap the benefits of citizenship, the State Department investigator said. Jesus Duenas-Barajas, a 53-year-old Mexican national, was convicted of lying on a U.S. passport application and aggravated identity theft. For nearly 30 years, Duenas-Barajas used the identity of Roy Nava, a teenager who died in 1978, records show.

Duenas-Barajas admitted in court documents he applied for a passport in 2012 at the Westfield Post Office on Red Oak Drive in Houston using the Social Security number and birth certificate in Nava’s name. He’d also obtained a driver’s license in the dead child’s name. Authorities caught on to the scam when he called Social Security in 2013 requesting a form and couldn’t answer basic questions about himself.

Investigator Adam Porter, from the State Department, said many think no one is harmed, but “these crimes do have victims.”

He tells trainees what brings home the seriousness of these scams is when the people targeted are significantly disadvantaged and in some cases still alive.

One example is the case of Rafael Soriano-Sanmartin, an Austin man sentenced for passport fraud in April. Soriano-Sanmartin had been a caretaker for a person who is blind, deaf and mute, Porter said. He admitted in court that for 20 years he had been using his client’s identity to secure documents.

In the recent case at Bush Airport, officials say Guedes overstayed his tourist visa and began using a Social Security card in the Georgia child’s name 17 years after Ladd died. From there, he obtained a pile of documents in Ladd’s name.

His most recent passport renewal raised some red flags for consular officials. First, his social security number was issued in 1996, 22 years after Ladd was born. Second, a death certificate showed William Ericson Ladd died in 1979. The birth date on that death certificate matched the birth date in Ladd’s passport renewal application.True identity prompted by gravesite photo

So who was the man who’d been serving drinks and giving safety demonstrations on flights to the Netherlands, Argentina, Brazil, Chile, Ecuador and Peru? The fingerprints the flight attendant had given for his United background check matched birth records of a son born to the Guedes family in 1972, according to court documents.

Social media images of the man posing as Ladd showed him with what appeared to be family members in Brazil, where about half his flights as an a United employee had been. A woman linked to those images, Maria Auxiliadora Duarte Guedes, told federal agents from the U.S. Diplomatic Security Service in Brazil that she didn’t know anyone named William Ericson Ladd. But she did have a son born in Brazil. And fingerprints on this man’s ID card matched the United employee’s passport application.

The deceased child’s mother, Debra Green, confirmed her boy was buried decades ago in Alabama. Green couldn’t recall whether he’d been issued a Social Security number.

When confronted by federal officials in September, Guedes identified himself as William Ericson Ladd. An official warned him it was a federal crime to lie to him. Guedes said he was born in the United States but was raised by his missionary parents in Brazil.

Then the official notified him the government had a death certificate for William Ericson Ladd. According to documents, Guedes became silent. The official showed Guedes a photograph of William Ericson Ladd’s gravesite in Alabama. The flight attendant ultimately signed a new fingerprint sheet using the name Ricardo Guedes.

As officials placed him under arrest, they recalled, he told them, “I had a dream, and the dream is over. Now I have to face reality.”